Rising to their biggest challenge yet…

Rising to their biggest challenge yet… 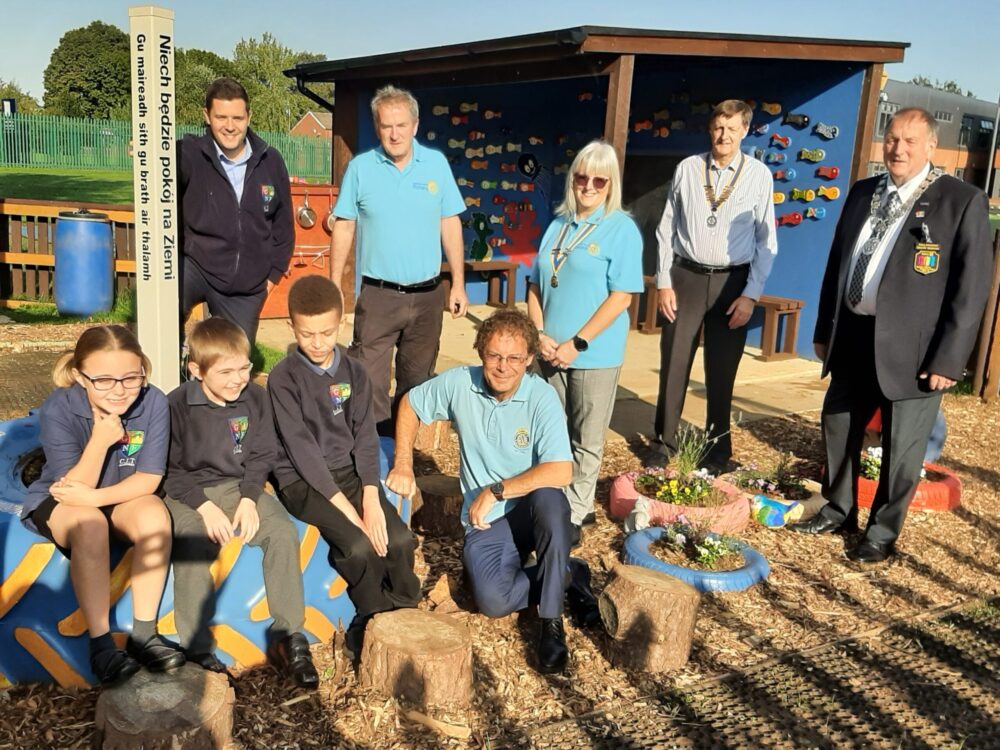 It was only six weeks ago that Grantham Sunrise Rotary Club President Anita Asken, had the idea for what then became the biggest project undertaken by the Sunrise Club, and was fittingly timed to mark their 5th anniversary.

The seed of the idea was to create a sensory garden within the outdoor classroom area for pupils at Ambergate Sports College, within a six-week period, ready for the new term, and this was unanimously embraced by all members.

With the agreement that the entire project would be within a small financial budget (less than £2,000), and with the maximum amount of effort from the club, the challenge was set.

Club member Kevin Hale drew up an ambitious and detailed design for the project, and also a six-week plan of action, to keep it all time-bound.

“I was so pleased that everyone was so enthusiastic, ready to roll up their sleeves and get involved. We received a lot of help from the local community in support as well, which was wonderful.

Everyone had a role to play to get actively involved. We had to overcome some barriers, not least the extremes of weather, from some very heavy rain and high winds to blistering sun, but throughout we never stopped. We had to be very creative with our resources, a lot of which were generously donated by local businesses, it was genuinely like living through an episode of TV’s ‘Ground-Force’!”

So, with dozens of wooden pallets donated, extruding nails were removed, and pallets cleaned up and painted several times over, a fence was created. A pond liner, paint, sand, ballast, tyres, ornaments and so much more, were kindly donated, and the Sunrisers set about improving the current outdoor classroom area, installing a beautiful sensory garden including a fish pond, along with more teaching space too.

Tree branches were cut and recycled, there was a lot of digging, painting, nailing and quite a lot of construction in different areas taking place, and at times it seemed there was too much to do with not enough time to do it in.

However, after a few phone calls the National Citizens Service dispatched two groups over a few days to assist with the workload, and Rotary District Governor Peter Berry attended, enlisting a few other Rotarians to participate as well, and soon the project was back on track. 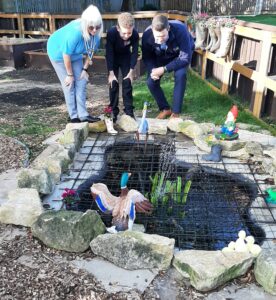 President Anita led from the front and was on site every day, ably assisted by a small group of Sunrise grafters, including Secretary Irvin Metcalf, who brought along his earth excavator and invaluable and numerous building skills to ensure that everything was safely constructed.

As the entire project was completed on time, and in readiness for the new school term in September, the Sunrisers have much to be proud of. The entire project would have cost a fortune had they not used outside contractors and the end result would not have been as interactive as the one created. It is quite bespoke for the specific needs of the young people at the school.

Anita added, “I was really impressed with the kindness and generosity of so many individuals and local companies. Their resources and assistance were invaluable to us.”

Coming in under budget, as a club we have produced a much improved outdoor learning area and sensory garden that will serve its purpose well. This is evidence of the type of club that we are, and the reward for our summer of hard work is seeing the young people thoroughly engaged and enjoying this new facility, and to that end I thank everyone that has been involved, it is a wonderful achievement.” 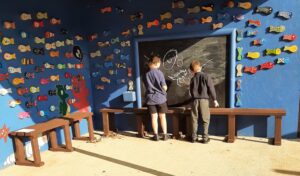 “Following the initial installment in 2017 thanks to the Tesco Bags of Help Scheme, we are so grateful to the Grantham Sunrise Rotary for their generosity and hard work improving and developing the space. This area allows us to deliver additional outdoor education on site, which enriches the curriculum offer for all pupils. The range of resources now available within the outdoor classroom area will allow pupils to enjoy a wider variety of sensory experiences. We have received excellent feedback from the pupils so far this term.

“The outdoor classroom was originally opened in memory of a former member of our PTA (FOSA) – Gemma Burland, and we are proud the facility is now being improved for future pupils who attend the school.”